Posted on a vibrant yellow sticky note (the extra large kind) behind my computer is a list of topics I keep intending to blog about but don’t because I’m so easily distracted by other topics. The Suquamish Museum, that beautiful and educational gem showcasing Suquamish Tribal history and artifacts as well as temporary exhibitions about other Salish Sea tribes, is a 15 minute drive from my house. At 34 years old, it’s one of the first tribally owned and curated museums in the country. I often take guests there. I intended to blog about it. But writer Kristin Butler beat me to it in an informative article published in Indian Country Today. I share it here. 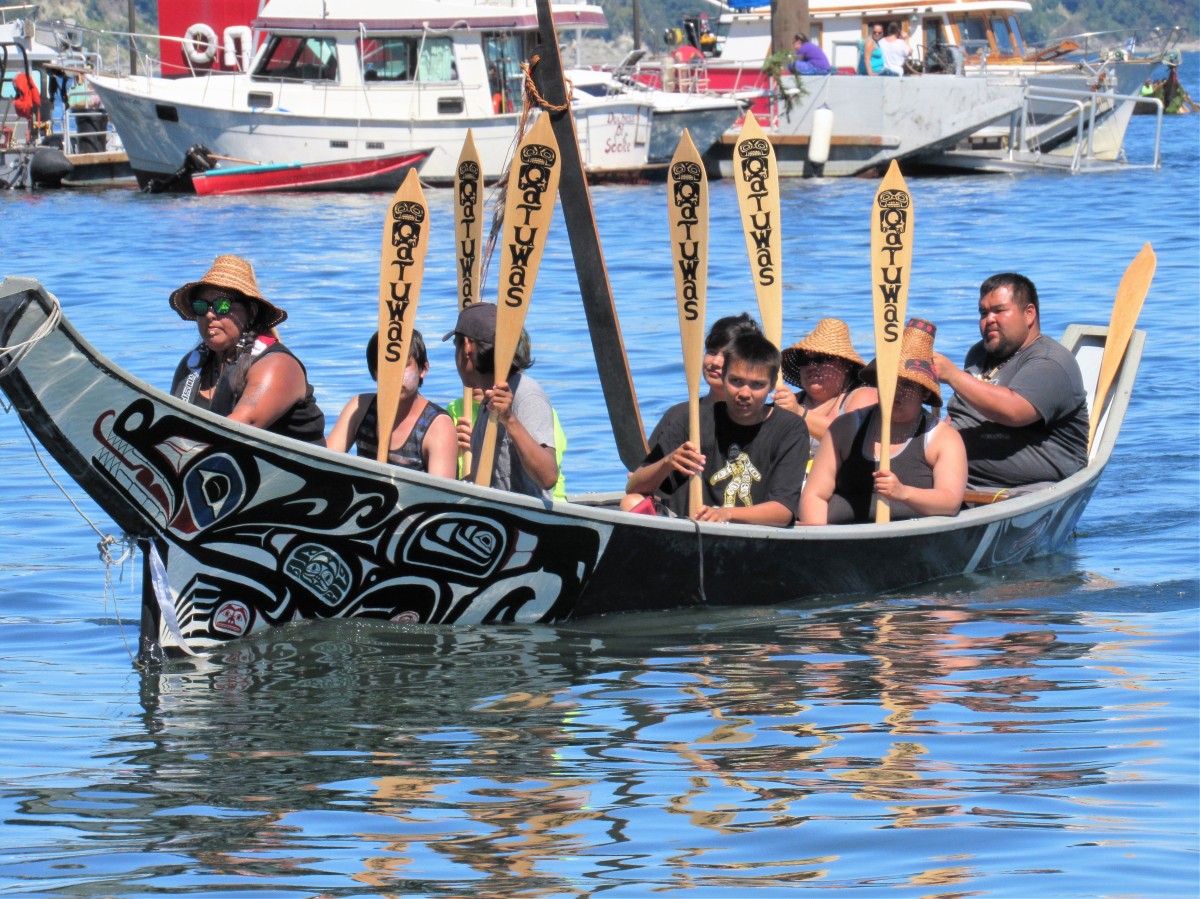 It was a beautiful day for a canoe journey. Standing on the long pier at Suquamish, you could see them as they rounded the point at Jefferson Beach, paddles glistening as they pulled in a rhythmic motion -tiny canoes against the skyline of Seattle and Mt Rainier. Throughout the day on Monday seventy tribal canoes landed on the shores of Suquamish for a two day layover as they make their way to Olympia, the final stop of this year’s Tribal Canoe Journey.

We’re lucky in Kitsap County – we have two tribal nations who both annually play host to the canoes. It’s about 26 nautical miles between the landing at Suquamish and the previous day’s resting stop hosted by the Port Gamble S’Klallam Tribe. In prior years the tired pullers would land on the Suquamish shore and, with a handful of volunteers, hoist their heavy, wooden dugout canoes on their shoulders to walk up the ramp to the lawn in front of the House of Awakened Culture. This year, a group of Navy men and women stationed in Kitsap County volunteered to carry the canoes.

It was an inspiring sight to watch each canoe stop before landing to ask and be granted permission to come ashore (often in their tribal language) from Suquamish Tribal Chairman Leonard Forsman. Yellow-shirted Navy volunteers then waded into the water, lifted each canoe and carried it uphill passing by the flagpole with the waving flags of the United States and the Suquamish Tribe to the applause of watching spectators. The symbolism of that cooperative effort was heartwarming – the original first peoples of Kitsap County sharing their culture and tradition, getting assistance from young Navy men and women, most just passing through on a tour of duty, to the applause of a crowd of Native and non-Native spectators, all under the flags of two sovereign nations. 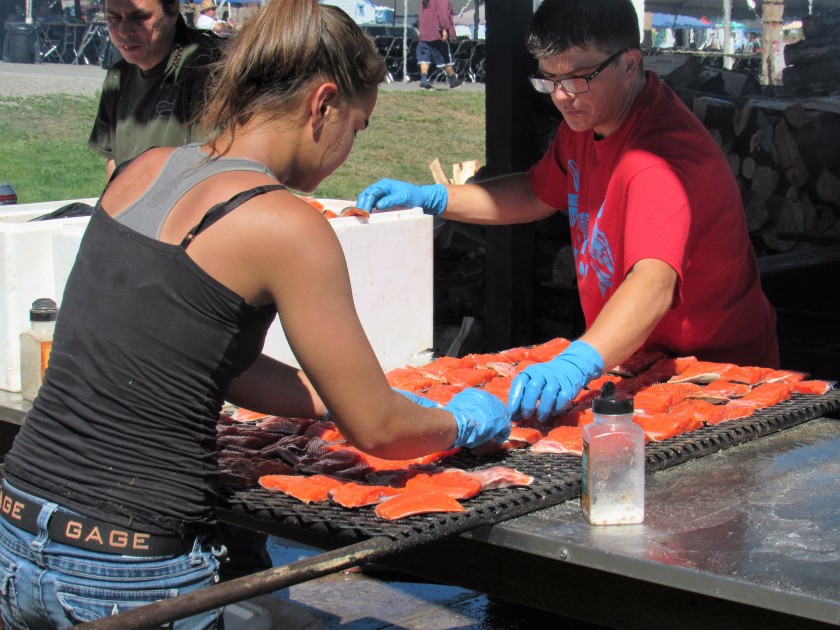 Over the next two days there were evening salmon and clambake meals served by Suquamish tribal members and community volunteers followed by tribal singing, drumming and dancing by the visiting tribes – a tradition that allows the visiting tribes to thank the host tribe for it’s hospitality. 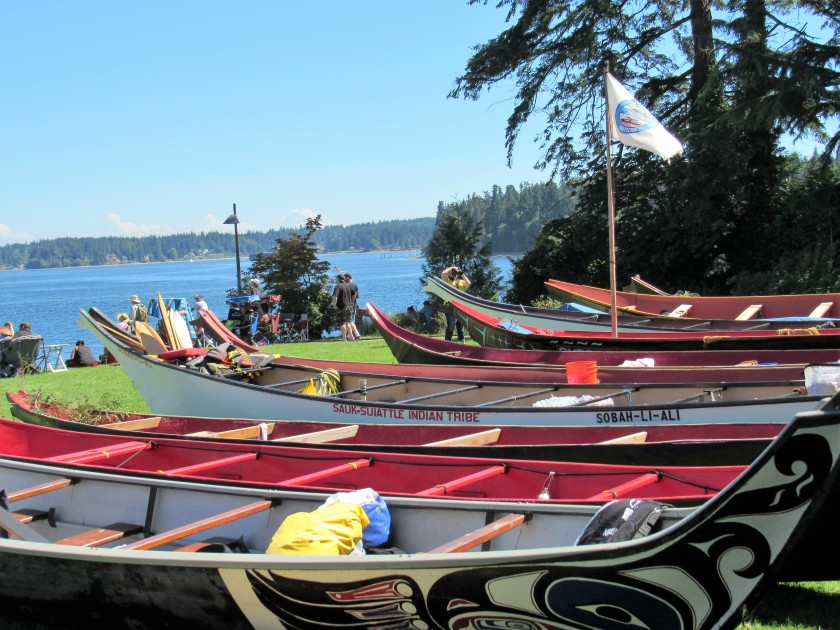 I went back on the second day to sketch the canoes, every one a work of art sitting on the grounds around the House of Awakened Culture. Each is a dug-out canoe made of trees that are found on each tribe’s land. The style varies by tribe though all have to be seaworthy enough to withstand the open water canoeing of the Salish Sea and Puget Sound. Some are painted, some bear tribal flags and wreathes of cedar branches. Some canoes have made the journey more than once and others are first-timers. The new Makah canoe was carved by students at Neah Bay High School.

It amazes me, the number of local residents I know who’ve never attended the Canoe Journey ceremonies hosted by the Suquamish or Port Gamble S’Klallam Tribes because they think they’re not open to the public. They are. You can watch and photograph the canoe arrival and departures, attend the evening dancing and drumming ceremonies and even volunteer to serve food and clean up. The tribes ask that you’re respectful and that you don’t bring or consume alcohol or drugs as the Canoe Journey is a tradition that promotes health and healing for the pullers and the tribes.